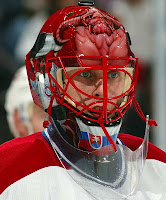 The Habs (30-20-6) Friday pulled a win directly out of the ass of Jaroslav Halak. The Slovak keeper stopped 46 of 48 shots, including three breakaways and a couple others he never saw. The Canadiens led 2-0 after one period, and then turned on their non-forechecking neutral zone clog—which did nothing to slow down the Avalanche as they outshot Montreal 36-9 over the last two periods. Yes, the Habs were utterly dominated by the last place Avalanche. Andrei Kostitsyn (19Gs, leads team) scored the game-winner with 2:16 left off a nice flip pass from Mathieu Dandenault. Kostitsyn sweetly settled the puck and deftly went forehand-backhand to slip it between Colorado goalie Peter Budaj's pads. It was the first road win ever for the Habs against the Avalanche. Next game: tonight! @ Vancouver. Halak back in net, sans demon mask.
Posted by copyranter at 5:00 PM

Yo. I'm in NYC for a couple months. Huge habs fans. Is there any place where I might find a couple other fans?

Well, they're around, though I don't personally know any. I watch the games at home...I've got NHL Center Ice, and an understanding girlfriend. Don't know of any bars that show their games, sorry.