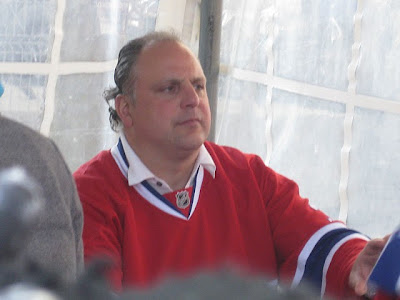 I can't blog if I can't watch. Instead, I'm listening to the terrible play-by-play calls of CJAD's Rick Moffat and the even terrible-er monochromatic commentary of ex-Hab and 1986 ring bearer (though he DNP in the playoffs) Sergio Monotone Momesso (above) on my MacBook. If I buy the second half NHL TV package, I'll resume blogging.
My take on the season so far (I've only watched four games)? Price, amazingly solid, O, adequate, D, surprisingly pretty good—but without Markov or somebody else significant by trade, not good enough for the playoffs. Tomas Plekanec has become a superb two-way player—which frankly shocks me (I was an early, heavy detractor.). The Habs impressive record to this point is mostly due to The East being even weaker than usual. My girlfriend looks at me listening to a hockey team on a laptop, and just smiles at how stupid that is. GO HABS GO!
Posted by copyranter at 12:30 PM 2 comments: